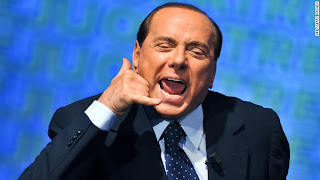 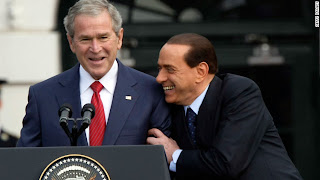 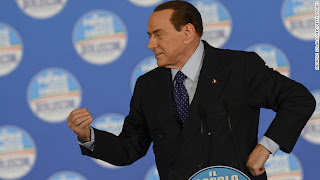 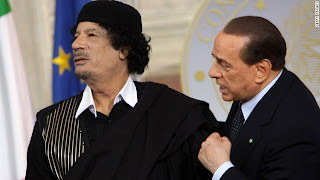 Here is CNN, despite of all the odds, Italian loves Mr Belusconi, so any aspiring politicians around the world who want to capture their nation's heart learn from  the secrete of Berlusconi success as:

1) You  makes unbelievable promises.
2) Your trials and sex scandals make you a national shame.
3) You choose your opponents are more statesmanlike and responsible.
4) Only your party in the election really stood for change.
5) Politics is now all about personalities,...
6) You should owner  of least three main commercial TV channels...

You have to be a grandiose irrational madman, walk along side boarder line dark and seedy area,  and utter womanise, die hard dyed hair and botex, younger girl friends aid to boozy woozy parties  make you envy  of any man or hated by older hacks(mostly ugly spiteful feminists worrier warriors who burn bras grow smelly armpit, bush legs as their medallone) whose  jealousy not you but your younger(grand daughter age) beautiful woman. That make you dinner table mighty malice storyline, hatred by million diners gallop down their wine as their feeble inadequacy but who cares. Your collectively rational logical opponents,  penguin suit tailored malformed bunch formal snider, they can ejaculated their virtuous statesmanlike code,  that make you more carnage of pious respectability,  while you are irresponsible ridicules buffoon for all season make people laugh, no one take you seriously contenders of their national leader,  your gut feeling tells you  under current people desire  as make as you go i.e. “ tax cut” “ free …”  most desirable story line,  you have to be a guy next door  can laugh each other off and yes you have to be deadly silly enough to be an  entrepreneur with billions in your pocket able to  buy your own advertising! Believe or not!