Showing Off Their Ugly Buckled Wives!

Gee, some people are showing off their ugly buckled wives! They have never have enough of each other so they stuck together together all the time every time. And finally they sick of each other and heading for opposite direction; having an affaire or fling to four corners for their own pathological spaces. Gone with sunset under the horizon forever or admission of their own so- human endeavors. Quest for their own self-revelation loveless romance and they come back their wives’ wellington-booted sun barked weathered faces, pleading guilty of Hamlet line and saying; please take me, I am the guiltiest true, made from sin, you have to forgive me as I forgive you too, we are heavenly mate our raved graveyard blur blur… What is so magic about stuck together all the time; anyway go together under few meters graveyard eventfully, cozily amorously hugging each other between shrouded skeleton, grating teethed souls; copulating squeak noised graveyard wind, make a perfect Pol Pot-requiem!

As a disciple (not dispels) of world, I am asking questions who ever which ever give me the satisfaction. The media online gives me heavenly answers; Alan( he fed up with me most of times you can imagin over years he put up with my insatiable queries)but Google Wikipedia blogs(they never tired of me asking questions – what a happy heaven) etc … if Dante living this age he titled his writing divine blessing of the internet. All the hotshots burgles daggles dazzling their brains online saying; pick my brain pick my insanity or sanity girl all yours! Wow amazing their generously so I am sucking their hard earn knowledge by saying: thanks thanks your generosity your grandiose handout seduction etc… I will never tired of your brains. Give me more more… I am bit of gullible when terms of what I want to know! Anyway long story make a short, through my readings, I think The Fed’s Chief (USA) did a great job and is doing splendorous job in the circumstance. Result all counting, arrival to Roma is important, which way you go there, well that is not much counting as the fiasco like that. Hey no one perfect, half the battle is fighting from the battle. We all know that we can not make everyone happy! I don’t know the terms of the appointment and is not my position comments on that but, few weeks back; we had a dinner with friends, over the dinner, among other things. The Fed(USA) Chief was in a menu, we chewed him with well-proportioned deed of youth, the spring, most of them agreed he did a great job in that circumstance, that is why the market rebounded so quickly which I agree too.
Posted by Young Sun Kim-Walker at 9:10 PM

From now on my title is “INVESTOR” I am not interesting anything else, but want be the queen of market! I am searching for a “Margin of safety”! the Treasure island for searching for margin of safetyyy and abnormal return…! I declared.
O Ha ha haa…that is a great…! Alan answered bit of skeptical smug and tailed his word… how could you do that...?
Well that is why I am digging now to find out which tombs have hidden treasures, all the necropolis… which have full of margin of safety and that make me abnormal return! Hee hee … I will prove you, watch me… pleas please… grumbling brambling…! Do you think other people do the same thing? I asked him meekly.
O that is sound a great… but investing is not just like digging an old graveyard! It is not your infatuation of excavating an archaeological site my dear! Knowing patterns and intuition all these things… and experiences of course! He still skeptical and not fully convinced about my self-crowned investor statue.
Well soon I will know entire things; pattern readings? Yeah no problems! and my snake psyche will guides me all the charts reading from the earth, my mind is octagonal fountain see the dept of the sea and my eagle eyed sky guide me; sight of sounds and the scent of ruins, weathered houses build from strong love, well time bracketed roads and there will be warm spring full of mineral that heading for power to towns cities… bula blua… I can see all these things intuitively…. I will be the queen of market! I will build a stronghold! Hee hee o la la… you have problems with that….? I sing sing song.
Ok my dear sounds great! I give you my millions blessing on your road! Don’t forget maps and time! He fortified wordings.
Billon blessing! What do you think my new statute? I tuft
O grand my dear grand! It is very beautiful day in here, the harbor is very claim! He says.
Posted by Young Sun Kim-Walker at 4:28 PM 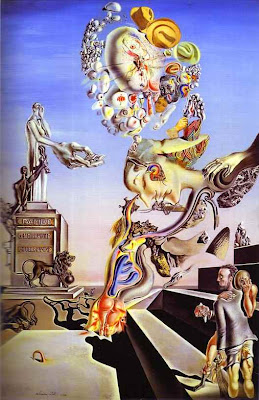 Few days back I went to see the oracle Dali walking. Heee he bite me I love him very much, you can see his wonder world. I have so many dreams similar to his paintings. So many… you know eventfully we all live his kind of world! Make me cry, they touch me deeply utterly, I am so alone when I see his paintings so lonely… I don’t think he was lonely when he painted these. He had full of suckers in his head, that make ms so lonely and bitter…. Just I am saying right! What can I say. When I see something so splendors I have this urge to destroy or to blemish it. So make me not seduced by them. I am not sure because I am a devil… so I swear at him , saying “ you fucking son of bitch what a great beast you are! Hee he bite me Dali lovely Dali Babble Ouchy Dali Bbali he bite me again! When you are looking at him you know purling purring purring!!! After that I told a friend, saying Wow the wickedly handsome bastard! He said “remember you are married!” So What! I woof….
Posted by Young Sun Kim-Walker at 7:22 PM

Life is all about positioning!

Life is all about positioning! Some people first born and only One, so he is the One and No One, there is no one else around so he is always No One. No competition whatsoever. He has been spoiled rottenly and gets himself undivided attention and love. That is right, He never share with his sister his gift from relatives he can have it all. He has a cake and eats it too.

In this digital age, amount of anomies quarantined, no one gives you god-dammed attention your encroachment suburban rough lantern-jaw-jarring blog. Your wishful ranking is Nabokov’s endless darkroom yearnings or Solzhenitsyn’s frozen turkey in a Gulag, make you wonton soup in the snow-monkey field, get-you-nowhere but anyway you like your own xenophile dodo go-goes so keep going! If you are in this situation no worries; you can always positioning yourselves top of everyone else as far as rank goes. Even you can top of such as the Nobel laureate Paul Krugman. When you don’t have intrinsic evidence like this No One Ranking. You can make your own ranking! That is right. Free world! Hee this is getting exciting! When you make interstice figure, you can either go above or below the real figure. Remember when playing your pigheaded self in here. You are the One, yes you are the No One! No worries giddied god-dammed manners, virtues and dignity etc… goody-goody never makes you No One, these save for a raining day when the all option runs out.

Completely oblongata, obnoxious and obscene. You are the Queen and your other self is the Knight. You have your own innate supporter. In this stage you become a monster. A fully grown monster with vengeance in your cartoon network. Take out your nice pair of red gumboots, stamping around wet ground and dance with snails and flowers frogs than you know you are truly the Queen! You surly don’t like anyone doing so excellent! Make you sick when you see a man doing so well in a gusty stuff; basing and melding scumbags around. feel like he took away your rightful bashings. You have been thinking that you could do that better if you were etc…etc… you are infuriated by his fineness bulldogger! And this guy considers himself is the Atlas, the world gigantic cock-ups are his problems.

So he is gearing up his super-volcano and make an extinction lake at his key board. His Don Quixote sword into scumbags’ throats; Ditty giddy, that is right Don Quixote made de Cervantes! Not the way around remember this! Therefore his fame is sky rocketing and that is sending you off obit! His obscene attitude of smugness and his goggled-gargled-google-map brain tapping things around traps that makes you sick more more. The old saying goes: when your cousin buys a property that make your stomach ache! Your deep resentment toward him, you are looking for channeling it but you can not tell directly to the public you are sick of your ingrown grudge! You know when a jealousy eats you up that is festive hell of exoticism. You can put your embitterers shot around but things can’t get better. I hate people better than me! Grumbling yourselves; how on earth he can get away sooo bloody many things, he gets everything, that is right he gets everything! Theses medallions. The old hag Doris Lessing, the million frenzy fans. Everyone possessive and they think his brain belong to them! So some people steal his name too, make it their car number plate! Drive him around band! O man that make you bitter deadly bitter! You can’t sleep at night.

Thus you are looking for a guidance easy your pain and agony. One night you accidently bump into the moon and ask her some tips for your desire for beating him up the rank; beat him beat him. The moon never desert to you as she gives you the answer; get around him! She says, no point compete him, he is a cunning brick so you can not beat him so get him around you! He will be always. No one, so you make yourself top of him, that is right so you become No 0 zero!!!!!!!!! You get it? Yes you get that. Right here you go: Ok? If you still don’t get that no worries, eventfully you get there. Let’s positioning you in this world. Bold is the word, cares-less anyone envies at you! Here is whole of whole goes, therefore;

Your Print / Online Columnists world of ranking are:

You –WoW- Hoee- see the above impressive numbers put you at top of the Nobel laureate Paul Krugman! Far ahead of him indeed!! Indeed beat him finally! That makes you god-dammed hallelujah. The nameless is the beginning of heaven and earth. Na-mu-guanshamboasal… the world is fair very fair…?? And the less said about #01, the better … The Best!
Posted by Young Sun Kim-Walker at 4:36 PM