A Grumbling Moral,  don’t dare judge my moral tail,  I am the Sovereign  of my own moral, so my moral head and a-moral tail belong to me !!
Posted by Young Sun Kim-Walker at 4:37 PM

I have known this long time ago, altruism has been caught by with its pants down!

…the view that people never intentionally act to benefit others except to obtain some good for themselves still possesses a powerful lure over our thinking.

The lure of this view — egoism — has two sources, one psychological, the other logical. Consider first the psychological. One reason people deny that altruism exists is that, looking inward, they doubt the purity of their own motives. We know that even when we appear to act unselfishly, other reasons for our behavior often rear their heads: the prospect of a future favor, the boost to reputation, or simply the good feeling that comes from appearing to act unselfishly. As Kant and Freud observed, people’s true motives may be hidden, even (or perhaps especially) from themselves. Even if we think we’re acting solely to further another person’s good, that might not be the real reason. (There might be no single “real reason” — actions can have multiple motives.)

So the psychological lure of egoism as a theory of human action is partly explained by a certain humility or skepticism people have about their own or others’ motives. There’s also a less flattering reason: denying the possibility of pure altruism provides a convenient excuse for selfish behavior. If “everybody is like that” — if everybody must be like that — we need not feel guilty about our own self-interested behavior or try to change it.
….
Altruists should not be confused with people who automatically sacrifice their own interests for others. We admire Paul Rusesabagina, the hotel manager who saved over 1,000 Tutsis and Hutus during the 1994 Rwandan genocide; we admire health workers who give up comfortable lives to treat sick people in hard places. But we don’t admire people who let others walk all over them; that amounts to lack of self-respect, not altruism.

Altruism is possible and altruism is real, although in healthy people it intertwines subtly with the well-being of the agent who does good. And this is crucial for seeing how to increase the amount of altruism in the world. Aristotle had it right in his “Nicomachean Ethics”: we have to raise people from their “very youth” and educate them “so as both to delight in and to be pained by the things that we ought.”


Gosh this is bit harsh why should I suffer unnecessary com'mon don’t kidding yourself! Yes I would like to delightful all the time! That is fair!

P.S Me first the formost my interest comes the first!
Posted by Young Sun Kim-Walker at 5:26 PM

What a Great Great!!!

It is so great people story, a great people, Pablo Neruda and Gabriela Mistral and my friend Josie’s country, who I met my English class long ago, he was keep telling me “ Young Sun you must recite to me some of great poems with your great broken English!” teased my broken English accent.

So I recite some of his native Mistral’s poem to him like this;

Creed
I believe in my heart that when
The wounded heart sunk within the depth of God sings
It rises from the pond alive
As if new-born.

I believe in my heart that what I wring from myself
To tinge life’s canvas
With red of pallid hue, thus cloaking it
In luminous garb.
Posted by Young Sun Kim-Walker at 12:47 AM

I am lost to the world

Posted by Young Sun Kim-Walker at 2:39 AM

One a fine day Sunbeam shins the Child and the Monk lay out the utilitarian blanket under the Autumn tree for the lesson:

Master, why the fish monger professor has so much pain for fishes? He agonise august his pain for the fishes out of water. I have never thought about fishes's feeling rather than my delightful food than anything else or lazy summer day you play at the sea and kill them for your delightful pastime. And then he hangs out with powerful people for asking for help full poor people instead of going to tell poor people stop bedding and breeding! The Child asks

Well Child that is utilialaian logic, as he feels deeply deepplllyeeeelyy…only feel for fishes and poor people but no time for them but as powerful as he is, he has no feeling for powers and riches but he has only time for them! The Monk says

O the utilitarian logic is a whore’s garter belt, it is a silky attention for two faced affection! It is not for poor people’s, only for powerful people! The Child finishes off the Master’s word!
Posted by Young Sun Kim-Walker at 11:55 AM

You Can Feast In Your Eyes 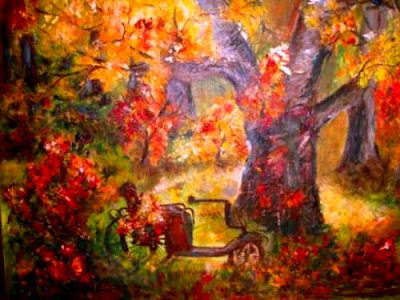 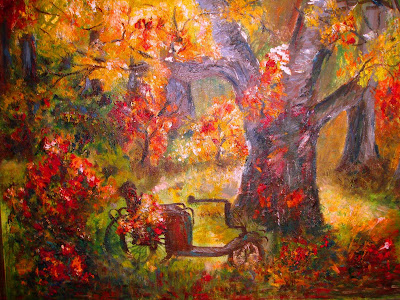 The Songs of Economic

Genre -the Songs of Parrots

--From dark cave man stone age text--
BTW I was looking for an incredible recording Kathleen Ferrier for this forever ever forever ever….
Here another logical parroting finishing line here!
Posted by Young Sun Kim-Walker at 12:06 PM