US Dumping Criminal Assad CW At The Sea!

The will destroy the most dangerous of 's chemical weapon stockpile on a ship at sea, the world's chemical watchdog says.

"The neutralisation operations will be conducted on a vessel at sea using hydrolysis," the Organisation for the Prohibition of Chemical Weapons said in a statement.

"Currently a suitable naval vessel is undergoing modifications to support the operations and to accommodate verification activities by the OPCW," the watchdog added.

This most hideous criminal Assad is not only destroying 23 millions'  for himself,  the despicable unsc 5ps is supporting and negotiating this unspeakable criminal, not only that they destroy our sea as a dumping ground for the criminal's toxin weapon! The world should know dictatorships are more dangerous than any other criminals or terrorist groups. As Assad is!

UPDATE:  The filthy mind of, the dummy unsc 5ps, comes up its best solutions of polluting our sea by the criminal Assad's  CW, where is sources of our food and our future  generations', instead removed him from the power! Why so complex for? Just removed this criminal from the power! BTW what is unsc's Charter?

Why Can't They Prevent This?


They can prevent chemical weapon but why  can't they prevent this...? You see they don't want...

Posted by Young Sun Kim-Walker at 5:27 AM

Wonder why they are so lucky....sleepless night at the Kremlin....go after luck

No one stop Russian people’s  aspiration, a great,  we can see the change:  Let the night scream, with a grand cannon of people’s voice,  torn apart darkness, sound  divine light…  true democracy? BTW They are Russian Police force! Indeed  We’re up all night to get lucky...!!!!!!!!!!!!!!!!!! go after true criminals not political activists.

P.S. G8 summit should have a karaoke program for the leaders!  Learning from the Russian Police force!

…  "Saving the country and the Syrian people is the utmost priority, power comes next,"… she said. She said: "Whatever the Syrians agree to is fine but there should be no foreign or regional interference in the will of the Syrian people."…

You know 2011 March,  Syrian people decided their own future already, knowing their Syria is better off without criminal Assad,  so they went out to the streets and demanding of ending  the criminal family 40 years  rule,  and what they have get?  This  unimaginable inhumanity brutality a mankind of crisis: THIS,  and THIS ... et al… this person, it appears that lived long enough and wise enough, able to see which side has  bread and butter… she should advise the mass killer that he should pack his head and run before his time is up!  How can anyone imaging after all of this atrocity, this mass killer Assad able to sustainable his power. He shouldn't worry about how Syrian people decide their future, they have already decide a long ago, the will of Syrian people clear and loud  "Syria, without Assad!"  The mass killer he loves Syrian people so much; he poured poison gassed on them,  airstrike on them with bombs, shelling them day and nights breathlessly, and drive them out from their own country...stave them with love..." Yeah "...Saving the country and the Syrian people is the utmost priority..."  Then he knows what he has to do!

After decades when the core components of US and Saudi strategic policies were more or less in sync, the is suddenly not playing by the Saudi playbook. It won't give the Syrian resistance a blank check; it is daring to consider softening its stance towards ; it has dared to criticise, however mildly, 's crackdown on the country's majority Shia population; and finally the Egyptian military's reassertion of its political primacy with the removal of President Mohamed Morsi this past summer.

This will not do, according to long-serving Saudi Ambassador to and present National Security Chief Bandar bin Sultan, who is warning that his country will make an “major shift” in its relations with if the Obama Administration doesn't come to its senses soon.

Many are imagining that the sudden emergence of fracking has so increased US domestic reserves that the time will soon come when it won't need Saudi oil and the messy relationship that comes with it. But this is most likely wishful thinking; first because the has never depended on the Saudis for its own consumption. Second, because it's still not at all clear that the reserves recoverable by the new technologies will be anywhere near the predicted amount of resources discovered. And third, because the US-Saudi relationship has always been about a lot more than oil, with military and strategic considerations playing an equally important role in the past 60 years.

International politics, ofcourse everyone work for their own interests, so should be.  But knowing we are living complexity, nature of problems solving is endless problems itself…,  but when people want to change their destiny from long period of time suppressions and dictatorship, that international community should stand for their side,  Syrian people,  this great people,  they had to deal with this unimaginable  brutality because they want to change one family dictatorship  rule 40 years.

Mr Kerry is flipping around his molding smiles on middle east and saying that U.S stands up for them -- I love  you all, that mean I love me more than anything else-- as when time comes… they will change again!  Word of circus game! Who can blames them all blame yourself!


Egypt's Defence Minister has said that the military should enjoy immunity under the new constitution, according to two leaked audios broadcast on Friday by Rasd Network.
General Abdel Fattah el-Sisi made the comments in an interview that was recorded few weeks ago, but was never made public.

"You need this military institution to be given immunity, it is not an immunity for Abdel Fatah (referring to himself) …. It is for the (military) institution, which is the backbone of the state in light of the current circumstances. The constitution should consider that during this transitional period,'' Sisi said in the audio that is now in the possession of Al Jazeera.

....al-Assad of Syria says support for the rebels fighting his government is blocking a deal to end the country’s civil war (news article, Oct. 31). I hope that no one takes such nonsense seriously.

For the last two years, Mr. Assad has been shelling civilian areas, preventing food and humanitarian assistance from reaching his country’s citizens, facilitating ethnic cleansing and firing sarin gas at civilians. Tens of thousands of civilians have been killed, and millions have fled as refugees.

The notion that supporting or arming his moderate opponents committed to a peaceful and inclusive Syria is preventing peace in Syria is simply ridiculous. Mr. Assad needs to go — and he must be brought to trial for war crimes and crimes against humanity.

Last few years mass killer Assad has been survived his life by everything imaginable  lies cheat  propaganda and ofcourse atrocities and also sucking Russian's foot... he even grows his own "patriot opposition" for his rainy day. He has been saying he is the only criminal can save Syria from his own destruction. That is true!  Syria, without Assad!
Posted by Young Sun Kim-Walker at 3:03 PM

Nature is  good grief and poignant,  flowers bathed morning dews, beatified their  faces pearly sunshine, bluest sky crowned their forehead, swing softly ensnare  bees, butterflies and dragonflies, a wicked spider is weaving his silken webs with finest craftsmanship,  ask ransom for his mastery cunning.  But end of the day everyone gets something, flowers getting their harvest season, bees butterflies get their honey nectarines, spider has his catches of his day, the wicked sky gets pregnant his bridal season!
Posted by Young Sun Kim-Walker at 6:09 PM

We will NEVER turn back! 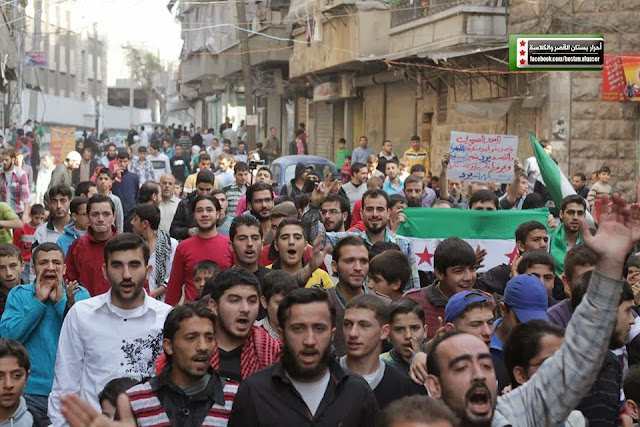 Great Syrian people never know what is meaning of give up give in ... The Victors only know keep going until they get what they want!  Syria, without Assad!
https://www.facebook.com/SyrianDayOfRage

Nice to see their victorious smile, never lost their great spirits of fighting among all these horrendous atrocities! They are fighters of world peace and security, not the empty mean spirited horse dung unsc that is for sure!
Posted by Young Sun Kim-Walker at 4:19 PM 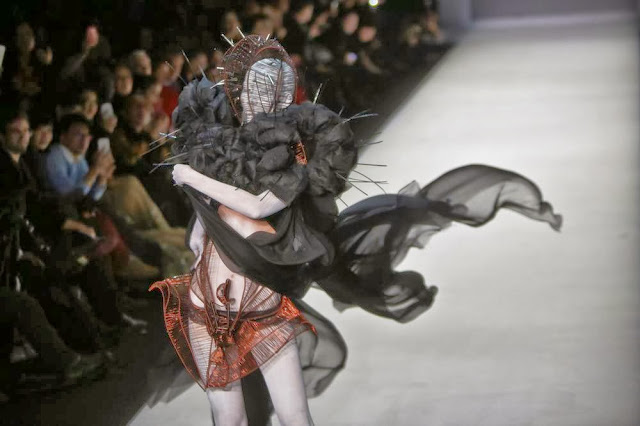 U,S Should Do More ...Senate Says

(Reuters) - Democratic and Republican members of the Senate Foreign Relations Committee strongly criticized the Obama administration on Thursday for lacking a plan to resolve the war in Syria.

"I just don't get a sense that we have a strategy," said Democratic Senator Robert Menendez, the panel's chairman, during a contentious hearing on Syria policy.
…
"I think our help to the opposition has been an embarrassment and I find it appalling you would sit here and act as if we're doing the things we said we'd do three months ago, six months ago, nine months ago," said Senator Bob Corker, the panel's top Republican.
…
Robert Ford, the ambassador to , acknowledged that many Syrians were disappointed with the level of support.
…
Republican Senator John McCain, among the strongest voices in Congress for backing the rebels, made clear he was not convinced by Obama's policy.

"You continue to call this a civil war... this isn't a civil war any more. This is a regional conflict," McCain said, noting that fighting had spread to Iraq, was struggling to handle Syrian refugees and 's involvement.

"For you to describe this as a 'civil war' ... is a gross distortion of the facts, which again, makes many of us question your fundamental strategy because you don't describe the realities on the ground," he said.
http://www.reuters.com/article/2013/10/31/us-syria-crisis-usa-idUSBRE99U18220131031


It is so grave… I think the 190 UN member countries must act to change the unsc, this is all but the unsc failure, vetoes… and Mr Obama unwillingness involved in along with Mr Kerry is very very cunning… U.S is very powerful country, only the country able to stop this unbelievable conflict and gives Russia leverage!  Via from https://www.facebook.com/SyrianDayOfRage
Posted by Young Sun Kim-Walker at 6:14 AM

Al Jazeera's Hoda Hamid said the UN special envoy Lakhdar Brahimi at a press conference today in said that all parties need to head to the 2 conference in a few weeks time.

He didn't blame the opposition but said it would be better if the opposition was less fragmented, particularly between those based in and overseas such as the Syria National Coalition (SNC), which is recognised by much of the international community.

Brahimi said the SNC continues to refuse to attend if there is no mention of the resignation of President Assad.

Without clear agenda Assad removal there is no point the Revolutionary Oppositions going to peace talk. WHAT FOR?  They won’t gain anything from attending unless clear removal Assad! Say, if criminal Assad stays, what happen? He killed more than 120,000 people, half of the population internal and external refugees. No matter what he says, extremists small minority, but large majority are armed revolutionary Syrians, they will not give up until Assad family rules end,  they don’t want either Syria become extremists Islamises state, they want just  end Assad family dictatorship  rule over 40 years. That is long time.   sees this point too. Gladly, most majorities of Syrian people see this point too now. The December UN Assembly the world 190 or member countries agree to change  the unsc, abolish the 5p  vetos system  and bring the power to the 193 member states equal democracy system. Surely 190 countries able to stand up  bully the unsc.

Posted by Young Sun Kim-Walker at 5:13 AM