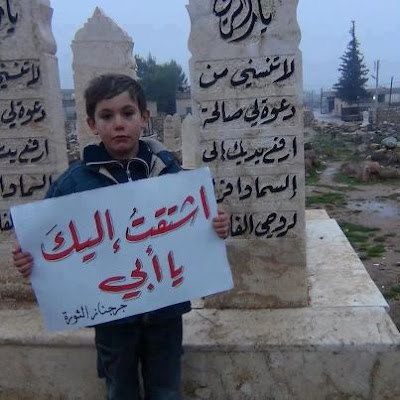 I miss you father!  Says, the son front of his father's grave...!  Of his father grave he made his  alter as long as he breaths,  his longings,  his love …, he will grow up like his father, the warrior,  adventure  and freedom fighter,  for his laurel medallion, he mourns for his father alongside joy for his Syria… long after freedom stride streets where laurels grows scent of his father, his universal mission is passionate and violent!

US made al-Nursa group terrorist black list, been thinking unsc is terrorist. UK FM now concerning about “terrorists group possible invasion every corners of the word!”  They horde their own nuclear weapons by themselves, make sure other countries are not, they sitting at seedy chair, put the animus banana banner “ world peace and security” they systemically exploitation for their gain. example a typical!  No one trust anyone for sure! US et al betray themselves, betray world community and betray Syrian people.
Posted by Young Sun Kim-Walker at 4:30 PM