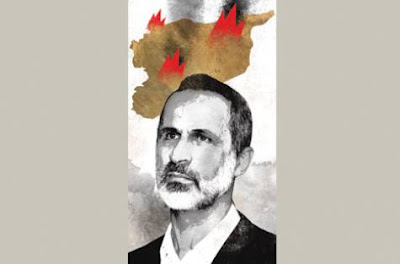 …
Key to the new international mood for talks is the leader of the Syrian National Coalition (SNC), Muath Al Khatib. Although Al Khatib is not a polished performer in the political arena, has changed his stance more than once and is accused by colleagues in the coalition of acting unilaterally, he has managed to install himself in a pivotal role at the centre of the crisis.
…
Many are questioning the role and motives of new Syrian Kingpin, Al Khatib. The Americans might see him as a potential puppet — the Karzai of Syria — and it was notable that his coalition did not condemn ’s recent air-strike inside .

However, the former Imam of the Umayyad Mosque in has a reputation for being an independent thinker and is clearly prepared to take a risk. We will have to wait and see what cards he is concealing in the hand he holds so closely to his chest.

He is the guy who has all the ingredients above anyone eles from the Opposition camp; looks, background, uncorrupted, been jailed few times and on the run, conjure  imam of the Umayyad Mosque,  has been inside Syrian until all along, ground people like him, wise and charisma… etc…, he is pragmatics,  what do you want more?
The world should stand behind him, support him!

Posted by Young Sun Kim-Walker at 3:35 AM