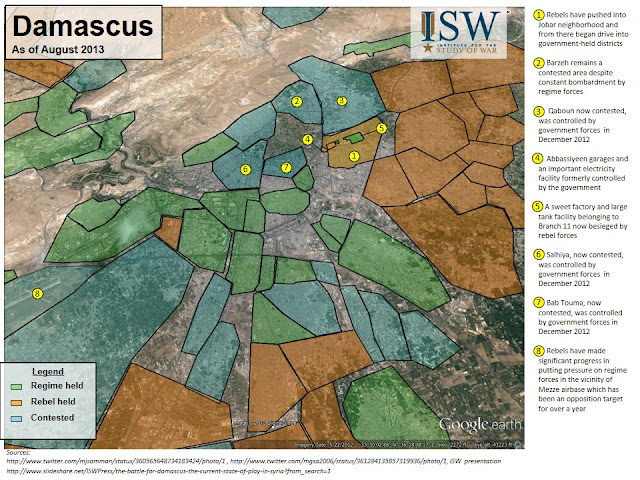 
Despite significant gains in Homs province, Syrian government forces are struggling against opposition forces on other fronts. In Damascus, opposition forces have mounted a major offensive, entering many government-held areas and gaining new ground. Although the government has gone on the counter-offensive, opposition forces have been able to maintain their advance and prevented government forces from storming a number of critical areas in the city. These gains reveal the extent to which the opposition is able to adapt to changes in the operating environment, and prove that the Syrian government lacks the capacity to conclusively defeat the insurgency despite increased assistance from external allies. - See more at:

Criminal Assad is losing conflict and he desperate after his assassinated attempt early August. President Obama very cautious what he has been saying about Assad gassed thousand of people last few days. Mr Obama’s  hesitation pretty clear why, which is understandable, so too Assad, as he feeds his lie along with  Russia and Iran allied with drumming of denial of the gassing and  fabricated to blame Rebels. The danger of Intentional international communities’ not action, after this grave event, he will use it again, much much bigger scales, he will not stop, try to kneel the international community for bigger unimaginable scales, then you would know what is that means.  He couldn't careless about international community outrages, as long as and covering him up he think he can get away with it! Lie doesn't need to be prove its truthfulness, lie doesn't need to be testify with its evidences! When dead of  human decency, filthy flies begotten mindful plagues.

Via from FSA General Staff
Posted by Young Sun Kim-Walker at 1:33 AM