The most hilarious fact I learned yesterday:

Democratic vice presidential nominee Sen. Joe Biden released 10 years of tax returns Friday...The Bidens' joint gross income hovered between $215,000 and $320,000 a year during this period...The amount they gave to charity during this period never exceeded one-half of 1% of their annual income. The Bidens never gave more than $995 to charity in any of the tax years, and usually gave much less.(Source)

Compare Biden's behavior to that of a typical American:

The IRS reports that those who itemize deductions on their income tax returns have claimed, since 1975, that between 1.6 percent and 2.16 percent of their income went to charitable concerns. (Source)

This contrast is an example of a broader phenomenon:

conservatives who practice religion, live in traditional nuclear families and reject the notion that the government should engage in income redistribution are the most generous Americans, by any measure. Conversely, secular liberals who believe fervently in government entitlement programs give far less to charity. They want everyone's tax dollars to support charitable causes and are reluctant to write checks to those causes. (Source)

Cool, he is just a charlatan that is all! Why would he matches his altruism a typical of those with his political view? I can understand his uncaring completely! Because this man has run for presidency more than once, that does mean he must has moral obligation for others and running presidency all about pretending not about cardinal virtue at all. Who said that because this he has to have greater than –average personal motivation for caring and giving. Therefore chose not chip in. 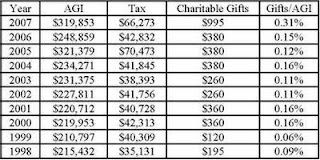