Everything Will Goes FSA Way 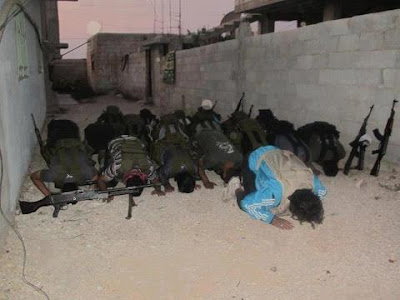 Base 46 was supposed to fall in a matter of days but rebels have failed to take it after a two-week siege of the Syrian army barracks which is a strategic prize in the battle for .
..
Causes of the failure to capture the base range from shortage of ammunition among rebels to differences between commanders of various rebel battalions, say sources in the rebel groups.
…
The threat of MiGs is seen as the main reason for the army holding on to the base. "And the lack of ammunition among our men," explained a rebel commander, speaking on condition of anonymity.
…
According to the rebel commander, 20 soldiers from the base defected last Friday and gave accounts of low morale and hunger among the 300 to 350 men defending Base 46.

"According to their testimony...many want to surrender but Alawite officers have threatened to kill them if they make any such move," he said, referring to the minority Shiite sect of which Assad is a member in Sunni-majority .
-AFP

To read more: http://www.nowlebanon.com/NewsArticleDetails.aspx?ID=444202#ixzz28hbaxRCW
Posted by Young Sun Kim-Walker at 3:37 AM