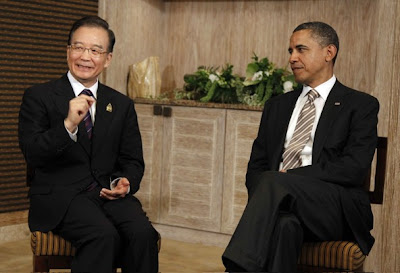 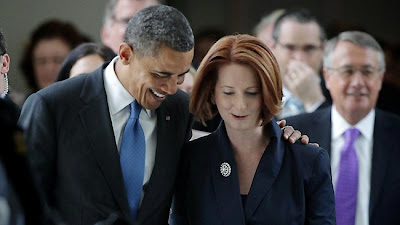 Obama, Wen Jiabao discuss economics, South China Sea
Talking about , humh deadly sensitive issues. is looking for old glory.  Least Yankee, they don’t claim land of their old colonies. They spent on trillions dollars on  and , and the  day they don’t claim these countries’ sovereignty. They have  some resources, economic benefit so as other counters do the same, but wihout spent on penny.
The below is Mrs Clintons' America's Pacific Century

Harnessing 's growth and dynamism is central to American economic and strategic interests and a key priority for President Obama. Open markets in Asia provide the with unprecedented opportunities for investment, trade, and access to cutting-edge technology. Our economic recovery at home will depend on exports and the ability of American firms to tap into the vast and growing consumer base of . Strategically, maintaining peace and security across the Asia-Pacific is increasingly crucial to global progress, whether through defending freedom of navigation in the South China Sea, countering the proliferation efforts of , or ensuring transparency in the military activities of the region's key players.

Just as Asia is critical to 's future, an engaged is vital to 's future. The region is eager for our leadership and our business -- perhaps more so than at any time in modern history. We are the only power with a network of strong alliances in the region, no territorial ambitions, and a long record of providing for the common good. Along with our allies, we have underwritten regional security for decades -- patrolling 's sea lanes and preserving stability -- and that in turn has helped create the conditions for growth. We have helped integrate billions of people across the region into the global economy by spurring economic productivity, social empowerment, and greater people-to-people links. We are a major trade and investment partner, a source of innovation that benefits workers and businesses on both sides of the Pacific, a host to 350,000 Asian students every year, a champion of open markets, and an advocate for universal human rights.
…

Many neighboring countries, boarder with , the very reason worry about ’s territorial ambitions, along with economic and  military power. The memory is so fresh as not long ago some these courses were colonies of old empire.   morden story.  Funny with world of politics
Posted by Young Sun Kim-Walker at 5:00 AM