It is normal to discuss the sovereign debt problem by focusing on the sustainability of public debt in the peripheral economies. But it can be more informative to view it as a balance of payments problem. Taken together, the four most troubled nations (, , and ) have a combined current account deficit of $183 billion. Most of this deficit is accounted for by the public sector deficits of these countries, since their private sectors are now roughly in financial balance. Offsetting these deficits, has a current account surplus of $182 billion, or about 5 per cent of its GDP.

…
Is there any way of improving the chances of success for the eurozone’s chosen strategy? Theoretically, yes. , as the main creditor nation could choose to grow faster, and accept higher domestic inflation for a while, in order to ease the process of adjustment. In practice, shows no sign of accepting this, but it is the best solution available, not only for the debtor economies, but also for itself.

Here, the below  is ever again Krugman's  nice “a  picture tells millions story within second!!” visual feast! Nice decoupling red and blue, are they go separate direction?  O euro are you going to divorces! 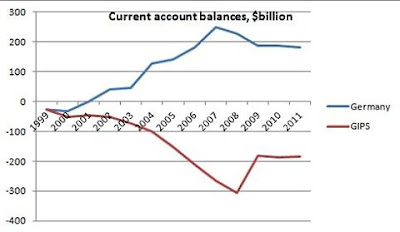 Yes, there is a clear policy, both side of beneficial but why doesn’t want to do? That is question, I suppose politics, and inflation is immediate affect on people’s daily life!  Need a visionary bold decision, Ms Merkel needs a glass of steep drink?
Here the euro sing song of their faith!