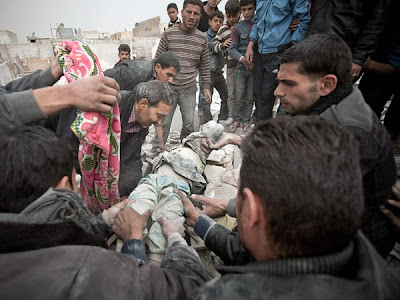 Photograph by Pablo Tosco, AFP/Getty Images
A group of men carry the cloth-wrapped body of a six-year-old girl after she was found in the rubble of a building destroyed by a missile in Aleppo.
Since the conflict began, the UN estimates at least 70,000 children have been killed within Syria, according to Francine Uenuma of the aid group Save the Children.
Published April 13, 2013
Posted by Young Sun Kim-Walker at 3:15 AM