Cost of Inaction in Syria 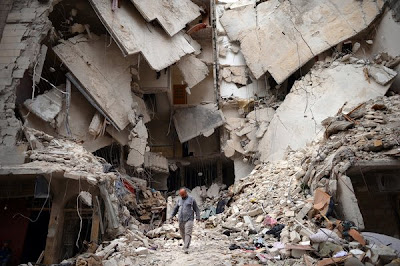 …
Finally, should build ties with the Free Syrian Army with the goal of denying extremist groups the ability to dominate the armed resistance and gaining influence with groups that will dominate ’s future. It was failing to build those ties in that allowed the resistance groups who opposed the to disintegrate into the Taliban and Al Qaeda.

The Syrian crisis has become a Gordian knot that cannot be easily disentangled. As daunting as the crisis looks, there is a cost to inaction — in human suffering, regional instability and damage to ’s global standing. And as the Syrian crisis escalates, and the world will only rediscover their stakes in the . If Obama truly wants to pivot away from the Middle East then he has to help end the bloodletting in .

Cost of... inaction in Syria more than war Iraq and Afghanistan!
Posted by Young Sun Kim-Walker at 3:24 PM