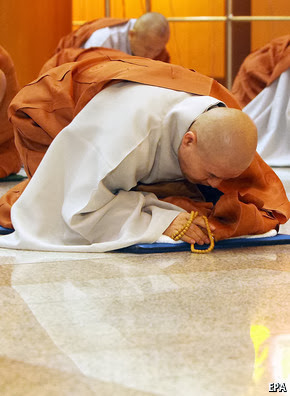 THE Venerable Jaseung has, of late, become good at saying sorry. When eight senior monks were caught smoking and boozing over a game of high-stakes poker in a hotel room last year, the leader (pictured) of the Jogye order, ’s biggest Buddhist sect, led the 108-bow repentance. Many thought he should resign. He assured them he would not run for election again. But on September 16th, he belatedly entered the race—and swiftly apologised for doing so.

It is called revolution in evolution in the order, they should get marry too and have family seriously. C’mon you can not ask them doing things that are inhuman,  Smoking, gambling  and boozing are inhuman….? How could they preach to people they don’t know what is so essence of human being, joys and sorrows...able to feel...have a good time! Go to MacDonald and pinball parlors ..., according to the science(?!) these things are normal, if any human can not do what are so normal to be human being that is called evolution of defection, which lead to religions fanaticism...?! (Which I personally don't agree!)  Finally they come down from a mountain  to real world…Good luck!

P.S I personally  respect individual choice of their belief, anything that make them comfort of their well being, their choice of believe I try  not to judgmental what other are doing... as long as they don;t hurt or harm to anyone...but then anything that are safe in this universal...everything that are  unintended consequence ... in my view sciences is the  most compellingly powerfully dangerous things... or may be safest  thing...?????!!!!

P.S A mother gives birth of her child, she never think of her child's death but only one thing her  mind... to give a life... but the first of child's crying is  the beginning of  the child ending...
Posted by Young Sun Kim-Walker at 6:43 PM