Not Matter What Keep Going!!!


The Syrian National Coalition has rejected the resignation of Ahmed Moaz al-Khatib just hours after the former leader announced he was stepping down out of frustration.

The reason Mr Khatib resignation as:
… 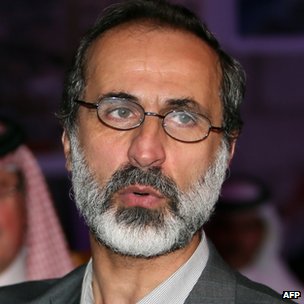 "I announce my resignation from the National Coalition, so that I can work with a freedom that cannot possibly be had in an official institution," Khatib said in the statement.

"For the past two years, we have been slaughtered by an unprecedentedly vicious regime, while the world has looked on," Khatib said.

"All the destruction of Syria's infrastructure, the detention of tens of thousands of people, the forced flight of hundreds of thousands and other forms of suffering have been insufficient for the international community to take a decision to allow the people to defend themselves," he added.
…

Revolution is passion, light of people, dream and hopes of the people, so many people were given their one precious life for this great revolutions,  for the betterment of their people and their beloved ! The leadership can not betray his people and by giving it up! Mr Khatib should not underestimated his position, the leadership is millions of people and , and freedom fighters and billion ordinary people  who are suffering from injustices around world, want to see the great Syrian people Victory!


The world disagree his resignation!  The world understand his bloody pissed off rage! The world agree the team (SNC) has rejected the resignation! So he must stay please!  The International community is a bunch of scumbags!  The revolution is hard, the leader must withstand all the odds and hardship and prepare to dirty work! Bites pride for the noble purpose!  Put up with scumbags!  Put ups with all the asssholes, bitches and thieves of international actors!  All comes with their own bag of agendas! There are no such things as free! Many countries or people in this earth come through these bloody process of achieving their freedom their Victory!  Long bloody struggles! Immense suffering and bloody agonies! Cost of millions lives! The great people, the courageous people dare to stand up tyrants, to  prepare struggles for  the betterment  that is not only for them but for the whole world’s  and make the civilization forward!   The revolutionary  never give up give in! The revolutionary only know keep going until the “Victory!” The revolutionary knows how to compromises!  The revolutionary know how to take advantage what they have! The revolutionary knows how to capture their chance! They also know that they have one step backward for the ten steps forward!  They are resilience, with  a great endurance, so they know how to  achieving the Victory!   No matter what! No matter what!  No matter what! To the Victory!

Tackles boldly to the US, if US says no then the revolutionary takes it as "YES" US can not afford sit at their comfy seat while this slaughtering going on...

Posted by Young Sun Kim-Walker at 3:37 AM