Colonel Qassim Saadeddine, the Free Syrian Army commander in charge of defending Homs says the rebels "desperately need heavy weapons" to repel a major government offensive against the city.
Speaking to the Guardian's Mona Mahmood, Saadeddine said many civilians were trapped in a government operation to rout rebels from the city.
Saadeddine, one of the FSA's most senior figures, said:

There has been heavy shelling of Khalidieh and Jurat Al-Shiyah districts by the Syrian army. They have used planes, artillery and 72 tanks to storm these districts. They have also dropped explosives in barrels from the air [see earlier].
In the last four days the Syrian army have tried to storm these areas, and stop them becoming a hotbed for the FSA. There have been fierce clashes and many have been killed and injured, but we don't have the exact numbers.
FSA brigades outside of Homs are trying to ease the pressure on the fighters inside these districts by attacking government checkpoints urrounding the city. But we only have light weapons, we desperately need heavy weapons to stop them.
Lot of civilians are stuck in these districts as the army will shoot any one coming out.
There is no safe place to hide in. If anyone gets wounded, there is no medical treatment at all and it is impossible to take them out of Homs.
And, forget about food and water, nothing can get in to these districts at all. 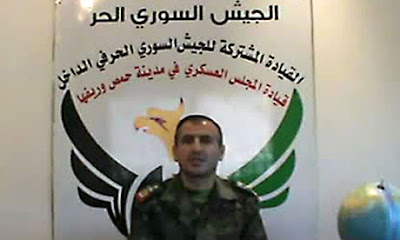 https://www.facebook.com/khaldeia.homs?fref=ts  click the link and see what the terror criminal sadist assad has done to human being, how  world not doing anything.

Posted by Young Sun Kim-Walker at 3:55 AM